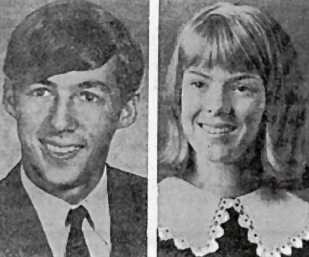 40 YEARS AGO TODAY, on October 9, 1976, Jay and Robin Fry and their unborn child were taken from this world by cold-blooded serial killer Russell Albin Smrekar. They were a beautiful couple, so full of hope and excitement about the pending birth of their first child. The shock and horror of that tragic year in Lincoln, Illinois has not been forgotten by those who lived through it. Please take a moment today to honor the lives of Michael Mansfield, Ruth Martin, Lloyd, Phyllis and Terri Schneider, and Jay and Robin Fry and their unborn child.

If Ruth Martin’s murder had been thoroughly investigated and ALL the evidence collected in her case had been revealed to proper authorities – particularly the bloody T-shirt found in Lincoln’s Kickapoo Creek Park – it’s possible that Russell Smrekar and another named suspect/accomplice might have been arrested and charged with her murder. If proper investigation of the Martin case had been carried out, and critical evidence had not been withheld and concealed from Logan County State’s Attorney Roger Thompson, it’s quite possible that the Schneiders and the Frys might never have been murdered.

It’s critical that what certain individuals and authorities FAILED to do in ’76 be done NOW, without delay. Those who were involved in the cover-up to conceal evidence should also be interrogated and investigated fully. Evidence supports that Michael Drabing and Russell Smrekar did not act alone.

PLEASE SIGN THE PETITION ON THIS WEB SITE calling for official reinvestigation and DNA testing of all existing applicable evidence in the cold cases of Michael Mansfield and Ruth Martin and the triple homicide of Lloyd, Phyllis and Terri Schneider. Your support is greatly appreciated.

"BURIED TRUTH The Unabridged Trilogy" copyright © 2013, 2015, 2017 by Bonnie J. Thompson. All rights reserved. "True Facts & Findings" © 2004, 2015 by Bonnie J. Thompson. No part of these eBooks may be copied, reproduced, sold or transmitted by any means without the written permission of the author. To obtain these eBooks by any other means than through the author or this website is copyright infringement and punishable by law.